So you’ve done your one-page plan, you’re still reading, and you’ve started writing. I usually suggest starting to write your main argument and leave your introduction till later, but it’s perfectly possible to set up 4 documents on your computer – introduction, main argument, limitations/counter-arguments and conclusion. Then as you read and summarise, analyse and evaluate start adding to them as relevant. However, be careful not just to narrate and tell a story. You must make an argument.

4. How to be sure you’ve made an argument. 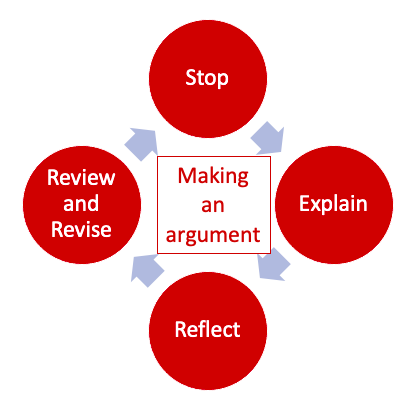 Once you have written your argument, gathered some evidence and have an idea of where you’re going, stop reading and writing for a day and take a break.  Next, grab a kind friend, Mum, Dad, brother, sister (or all of these) and tell them about your extended essay in just 5 minutes. Explain the background, what you think and how you’re using evidence to support this. Explain what the limitations are of the argument you’re making. Say whether in the end you think it will still be valid, or whether it has been undermined to a large extent by researcher bias, or methodological problems. Are there other reasons besides these that you are uncertain about it? Has the evidence maybe made you more certain that yours is a valid argument?

If your friends or relatives don’t understand what you’re saying, it’s because you’re not clear enough, not because they don’t know psychology. The argument is of course supported by psychological evidence, but you’re not going to detail that in your 5 minute summary, so therefore your basic argument should be clear. If at any point one of them asks ‘So what?’ this is an indication that what you have just said is not linking to your argument. Stop and reflect.

Encourage your critics to ask questions. Use your meetings with your teacher or supervisor to do the same thing. Any time you become confused about where you’re going, stop writing, and read and think some more. Review until clarity returns. Then if needed, revise your argument or select better evidence to support it. You’ll be glad you paused and took the time to do this. It can save a lot of rewriting at a later stage.